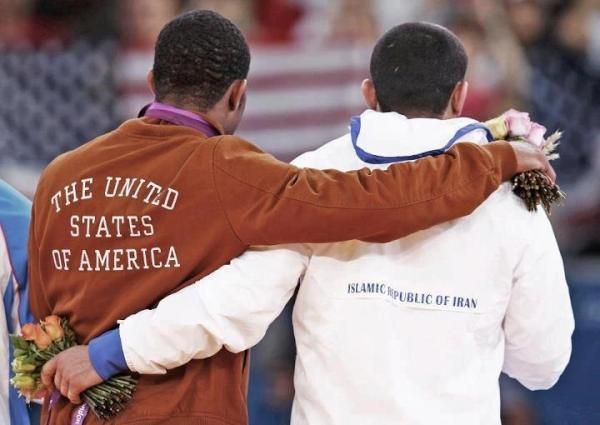 I normally don’t like to get political in what I write.  I feel that the blog is there for wrestling and to promote the sport of wrestling and politics shouldn’t factor in to the equation.  I also feel that everyone is entitiled to their own opinion where politics is concerned and trying to convince someone of your point of view is sometimes tiring and pointless.  Neverthless, I was thinking to the past Freestyle World Cup of Wrestling held in Kermanshah Iran a couple of weeks ago.  With President Trump’s travel ban to certain countries in the Middle East, the response of the Iranian government was to ban the American athletes from competing in the tournament.  As we all know, the travel ban was reversed and the athletes were allowed to compete.  Politics threatened to derail a great tournament and in the end, politics were left behind for the greater good of the athletes.

It occured to me that in sports and as athletes we are ambassadors.  We are ambassadors for our sport, our club and our country every time we step out on the mat to compete.  We are there to leave politics behind for that brief moment and to compete to our fullest and to represent ourselves the best we can.  This shouldn’t just extend to competitions but to the practice room as well.  In Canada, we have an ethnically diverse population and this can be seen often in our wrestling room as well.  People from different cultures, religions, ethnic backgrounds and walks of life step on to the mat to train as partners, brothers and sisters.  One would hope that as a team, diffrences can be set asside in order for teammates to train as each partner brings their own unique quality to the practice.  Essentially, on the mat, we all speak the same language: Wrestling.

Sports has a way of bringing people together that may not have associated with one another otherwise.  Sport is unifying force that we as coaches, athletes and spectators all gravitate towards.  As the great Nelson Mandela once said about sports: “Sport has the power to change the world.  It has the power to inspire. It has the power to unite people in a way that little else does. It speaks to youth in a language they understand. Sport can create hope where once there was only despair. It is more powerful than government in breaking down racial barriers.”

When I first read that quote, it had a profound effect on me.  Since then, I’ve tried to impart the spirit of that sentiment to my athletes and that win or lose, we must always give it our all and conduct ourselves with class and dignity when it’s all said and done. I would hope that other coaches are doing the same and that there is a genuine atmosphere of inclusion both in the competition and the practice.  Politics and sport should not conflict with one another.