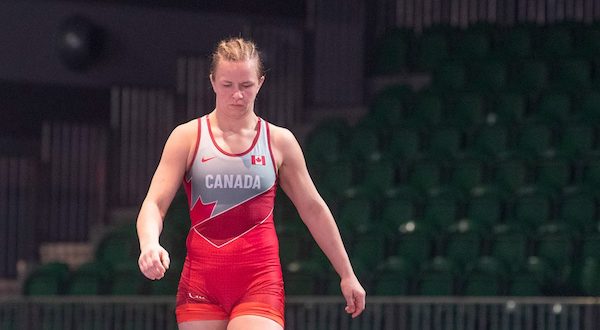 It’s Monday, the first of our fourteen-day quarantine since Quebec Premier François Legault announced that schools will be closed for a two-week period to help control the spread of the CODVID-19 virus that has escalated to pandemic levels. Before the shutdown, most of my students saw this as a good thing. After all, what’s better than two weeks off of school for a teenager? Almost nothing, that’s for sure.

I had a cautious warning for them before the imposed break, that it wasn’t a vacation. First of all, we would have to make up the work that was not done. Second, for students who are in courses with a provincial exam associated with it, this time off could be devastating as these courses are tightly packed to begin with. Lastly, the novelty would wear off and sooner or later and they would miss the routine of coming to school and seeing their friends. I also looked at what this would do to my school team.

In international wrestling news, the US Olympic and European Wrestling qualifiers were postponed and the NCAA cancelled their Championships, thereby eliminating the larges college wrestling championships in North America. The financial implications cannot be understated as people are affected everywhere.

On our home front, it was announced a short while ago that both Canadian National Championships would be postponed pending the results of what would be the best course of action. The Pan-AM Olympic Qualifiers were to be wrestled in front of an empty venue and on a personal note, the youth level tournament that I had been preparing my young high school team for, the Jeux de Montréal, was cancelled.

Even closer to home, practices with my school team are obviously cancelled until the school reopens. This is both sad and discouraging for me, as my young team was making some solid progress and I could see beginnings of the plan that I had set into motion for a 3-5 year rebuild starting to take shape. To lose that momentum now is unfortunate, but unfortunately necessary as public health must be a priority.

I guess this isolation period really hit home for me on Sunday, as I woke up for my normal time for Sunday practice. Even though I knew that we didn’t have practice old habits die hard and I was up even before my alarm had rung. I think this routine has been so ingrained into my schedule that it was difficult to break, even knowing that I didn’t have to go anywhere.

For our athletes that have been training hard for the Canadian Nationals, this is a huge blow. While they can still do some minor training on their own, nothing will replace the mat time needed. Simply put, wrestlers need to wrestle. No amount of running or calisthenics can substitute for this and should the Canadian Nationals be rescheduled; how will athletes be able to adequately prepare? Most teams prepare for the whole year to wrestle at the Nationals and two weeks off can have a deleterious effect.

Finally, it should be noted that actual lives are being affected by this. We have the luxury of complaining that our training and our athletes are affected. While that may be true, we have to remember that there are larger issues at hand. To lose the National Championships is merely an inconvenience, and the gravity of this should not be overlooked. For the people who read the blog, I wish you good health during these troubling times. Here’s hoping that this whole thing will be resolved and that we can resume practices and tournaments in the near future.