Quebec athletes were well represented at the U-23 World Championships held in Budapest, Hungary. Athletes from Concordia University, Montreal Wrestling Club/NTC and Vanier College were present and made up most of the Canadian contingent, totalling eight athletes. Representing Concordia University were Samuel Barmish (79 kg), Alex Moore (86 kg) and Aly Barghout (125 kg) for the Men while Jade Dufour (50 kg) and Amanda Savard (65 kg) would represent the Concordia Women. Finally, for the Montreal Wrestling Club/NTC, Guseyn Ruslanzada (74 kg) Jeremy Poirier (92 kg) would wrestle in the Freestyle Men’s division while Alexia Sherland (68 kg) from Vanier College would be the final Quebec athlete on the Team Canada roster. 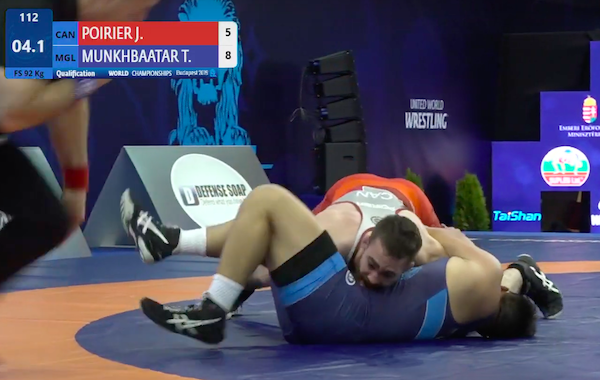 Jeremy Poirier with nearly got the pin versus Mongolia

Day one of Freestyle wrestling started off with Samuel Barmish facing off against Jakub Sykora of Slovakia. Sam would start the match off well but would end up losing in the end and would not move on.

Day two would see s slew of Quebec athletes competing as Guseyn Ruslanzada, Alex Moore, Jeremy Poirier and Aly Barghout would take to the mat. In the 74 kg division Guseyn’s first match would be against Giorgi Sulava of Georgia. Despite wrestling well, Guseyn would lose his first match and would not advance to the Repechage.

At 92 kg, Jeremy would face off against a tough opponent from Mongolia, Tsogtgerel Munkhbaatar. After a back and forth match, Jeremy would come up just short, losing by a score of 8-5 and would not advance.

In the 125 kg division, Aly Barghout would win his first match via Injury forfeit and would face Khaled Omr Zaki Mohamed Abdalla of Egypt. After a long match, Aly would lose by a score of 4-0 and would also not advance.

In his first match, Alex would post a solid win against Zaur Beradze of Georgia (6-0). His next match would see him face another tough opponent, Azamat Zakuev of Russia.  Alex would win that match by a score of 5-2 where he would advance to the quarter final to face Osman Gocen of Turkey. Alex would start the match strong but would end up losing and would not advance to the Repechage.

A congratulations has to go out to our Quebec athletes who, despite the results, wrestled extremely well on the world stage. To qualify for a World Championships is an accomplishment and they acquitted themselves well.

Alex Moore with an impressive win over Russia