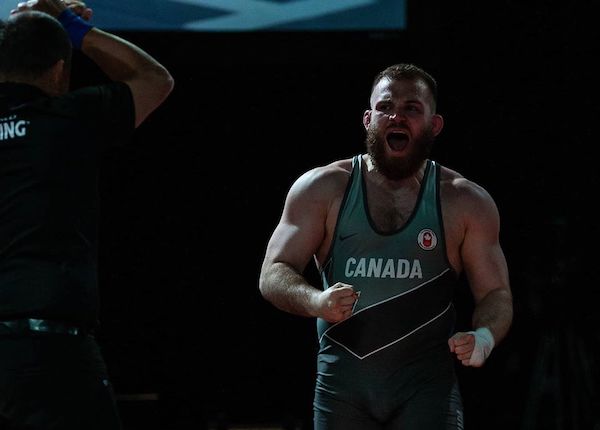 The Pan-Am Olympic qualifiers took place this past weekend, amid the concerns from the Coronavirus as four Quebec athletes looked to secure their spots for the 2020 Olympic Games in Tokyo. John Yeats (77 kg) and Thomas Rahontsiiosta Barreiro (97 kg) from the Tristar Wrestling Academy would compete in the Greco-Roman event while Linda Morais (57 kg) and Jordie Steen (97 kg) would look to qualify in the Women’s Wrestling and Freestyle events.

At the Greco-Roman qualifiers in his first match, Yeats would face off against Patrick Harrison Smith of the United States. Yeats would lose the match (8-0) and would not move on to the Repechage.

In the 97 kg Greco-Roman event, Thomas Rahontsiiosta Barreiro would wrestle a Round-Robin to determine the winner of the weight division. Thomas would face off against Luillys Jose Perez Mora of Venezuela. Despite wrestling a good match, Thomas would lose by Technical Superiority (9-0) to set up his next match with Luis Gerardo Rivera Alvarado of Mexico.

Thomas would lose a close match by a score of 1-1 and would wrestle his final match versus Tracy Gangelo Hancock of the United States.

Thomas’ last match would end up with a score of 9-0 and would not move on to the medal rounds.

In the Women’s Wrestling event, Linda Morais (57 kg) from the Montreal Wrestling Club / NTC would face off against Helen Louise Maroulis, the former Olympic and World Champion from the United States. Linda would wrestle a tough match against a quality opponent but lose the match by a score of 10-2.

Linda’s next match would have her face off against Lissette Alexandra Antes Castillo of Ecuador in which she would win by a score of 9-3.

Linda would then wrestle against Giullia Rodrigues Penalber De Oliveira of Brazil. Linda would win that match in a dominant fashion by Technical Superiority (10-0) to face off against Alma Jane Valencia Escoto of Mexico in the Semi-Finals.

After a back-and-forth match, Linda lose the match by pin to set up a Bronze Medal final versus Nes Marie Rodriguez Tirado of Puerto-Rico.

On the last day of competition, Quebec’s last athlete, Jordie Steen of the Montreal Wrestling Club / NTC would look to qualify his weight at 97 kg. In his first match, Jordie would wrestle against Reineris Salas Perez. Despite a strong match, Jordie would lose that match by a score of 5-0.

In his next match, Jordie would wrestle against Miguel Javier Sanchez Geraldo of Mexico. Jordie would win that match in a dominant fashion by Technical Superiority (11-0). Jordie’s next match would be against Jose Daniel Diaz Robertti of Venezuela.

Jordie would go down in that match by a point but would also go on to win via Technical Superiority (12-1) to set up a Semi-Final match versus Luis Miguel Perez Sosa of the Dominican Republic.

In the finals, Jordie would concede on an Injury forfeit, thereby taking home a Silver medal. Congratulations Jordie on your excellent tournament and best of luck to John, Thomas and Linda as they may have one more chance to qualify for the Olympics in the final qualifying tournament to be held later on in the year in Sofia Bulgaria, depending on the current state with the coronavirus.