The University of Regina announced on Monday that they have cut the Men and Women Wrestling programs for the upcoming varsity 2018-2019 season.  The cutting of the programs is in line with the athletic department’s philosophy of saving money.  The removal of the two teams (along with the Men’s Volleyball team) will save the university nearly $500 000 in funds that will be redistributed amongst the other programs.

Usually I only speak about the state of wrestling in Quebec but I feel that Regina axing its wrestling programs serves as warning to the wrestling community across the country.  The University of Regina has been a staple of the U-Sport roster of teams for many years.  I remember competing against many opponents from Regina and having some good matches.  The university has produced many athletes that have competed successfully at both the university and Open wrestling championships for many years in both the men and women divisions.  They’ve had two long-time coaches who have provided stability and have also become the face of the program.  Not seeing the University of Regina next season will be strange to say the least.

The termination of the programs means that both coaches will no longer have employment, not to mention the athletes that attend the university specifically to wrestle.  Essentially, this affects lives and it was all done quite suddenly it seems, in order to save money.  This would imply that these programs were not profitable and that they weren’t “good business”.  The model of any business is that you have to at least post a profit.  If not to turn a profit, then at least break even for the calendar year.  This is where wrestling will run into many obstacles.

Let’s put this out there for the record: wrestling is not a popular sport in Canada.  We don’t sell out arenas like they do in the United States, nor do we enjoy the partisan support.  Anyone in Canada who would potentially want to invest in wrestling would see this as a poor business investment.  Essentially, wrestling did not fit into the business side of Regina’s university’s athletic programs.  However, in this instance, the business model can’t apply.  Education is not an industry and in Canada has never been moneymaking endeavour.  In Quebec in particular, our university tuition is amongst the lowest across Canada.  Universities as a whole across the country cost less than our American counterparts with similar academic rankings.  Therefore, the idea of education as a business doesn’t apply and shouldn’t follow the business model.  In amateur sports, this is also the case. 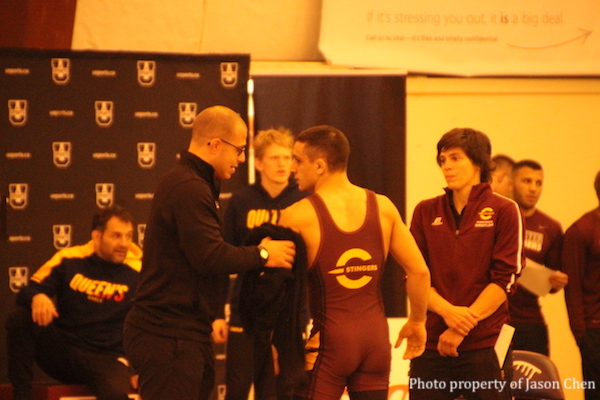 What will the loss of Regina’s wrestling program mean to the rest of the country?

I’ve long argued in my profession of teaching that the role of education has taken on a more utilitarian role in our society.  It’s not learning for the sake of learning; it’s what can learning this particular subject give me to be financially secure?  Education is done more for its extrinsic uses rather than its intrinsic ones.  Personally, if you’re only pursuing education because you want to get a job that will pay you well and not one that you’re passionate about, then I can’t see that being a happy and a fulfilling future.  Amateur sports falls into this category as the majority of sports won’t attract a sustained fan base to make it a viable business model.

Canada’s national winter sport is hockey and some would definitely say the most popular.  Some would even argue that it’s our national religion.  Yet even some junior hockey programs report lower fan attendance these days and even the 2018 World Junior Hockey Championships (the showcase event in Canada for junior hockey) reported the lowest average North American attendance since 2005.  Even our national “religion” cannot sustain numbers unless it’s at the professional level.

The question that now has to be asked is what will the loss of one of the more stable university wrestling programs mean for the rest of the country?  As a former member of the Concordia Wrestling team, it was always hard to compete with other sports in terms of numbers.  Results were not a problem as we were either equal or better than the other teams at the university.  Yet the argument that was always given was that wrestling was not a priority, as it didn’t bring in the money or the vast number of students to participate or watch.  The emphasis was always about football and then hockey, citing them as the number one attraction for the university.  And yet when looking at past results, Concordia’s football team has never won the Vanier Cup (the national title trophy) and been runners up only once in their history.  Conversely, the Concordia Men’s wrestling team have taken home eight national titles and have been runners-up quite a few times as well.  So clearly results are not the issue in football, only numbers.  It’s also evident that the team markets itself well since they don’t have to rely on winning to attract people to come and watch their games.  So would this not imply that participation is better than actual results?  Clearly this is not the model for a well-run business.

The point I’m trying to make is that with the exception of a few sports, amateur sports will never be able to generate revenue to make them profitable or at least self-sustaining.  The variety of sports should be available to all since not all of us play football or hockey.  To force us to play one or the other takes away our individuality and forces us into that mentality of one size fits all.  Sports in Canada will almost never give us something that can be sold or packaged.  It instead gives us confidence, purpose, discipline and that competitive nature.  These are qualities that employers are looking for, but are rarely considered when evaluating the usefulness of sports.  Instead, we switch back to that utilitarian mentality of what can it do for the person.  This in turn puts it back into the business model of sport, which clearly is not feasible in Canada.

It’s impossible to predict the future and hopefully the demise of the University of Regina’s wrestling program is not a precursor to wrestling across the country.  I for one would find this sad on a personal level and would not want to be shoehorned into supporting a sport that I wasn’t passionate about.  Wrestling as a whole has value in what it gives to an athlete on a personal level and should not be quantified like a business would do.  I would like to wish the best of luck to all the athletes and coaches in Regina.