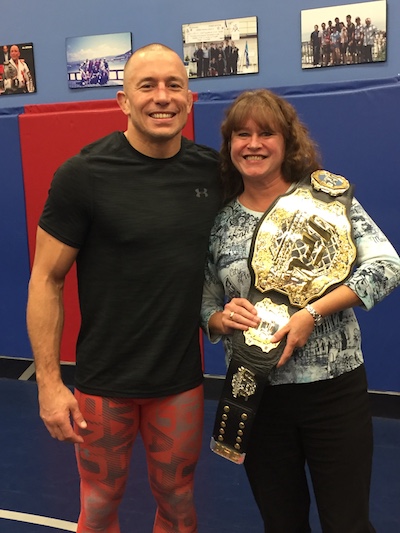 “Excuse me, could you tell me when my match is?”

Those words were said by a very young and inexpericed kid over twenty five years ago.  I asked them to the lady at the table not knowing who she was but I figured that she must know something seeing as she had all of the papers in front of her.  I didn’t know it at the time but this lady was Judy Paul but today she is known as the Chief Pairing-Master in Quebec.

In the wrestling community, the pairing master is one of the true unsung heroes.  They’re the people tasked with creating the bout sheets in a certain way so that the tournament both runs smoothly and fairly.  Often we as coaches and athletes don’t realize just how much work is going on behind the scenes as we’re too busy in the competitive side of the tournament.  But without the Pairing-Masters, there would be no tournament.

Judy Paul has been a fixture in the Quebec wrestling scene as our most able and experienced Pairing Master for many years now.  I have seen Judy at every tournament in Quebec as well as several National Championships throughout the years and she always has a smile on her face.  She in turn has seen me grow from that young and inexperienced kid to the coach I am today, complete with my own young and inexperienced kids!

I would like to personaly thank Judy for her many years of service and hope to see her for many more.  The sport of wrestling in Quebec wouldn’t be the same without her.

Judy Paul and The Champ!

This blog was dedicated to just one unsung hero in the sport of wrestling in Quebec.  I’ll try to make this a regular feature as there are so many people that help the wrestling community in Quebec to continue on as well as it has been.  Can you think of any Unsung Heroes?  When next we meet at a tournament, we can definitely discuss how to recognize their accomplishments.