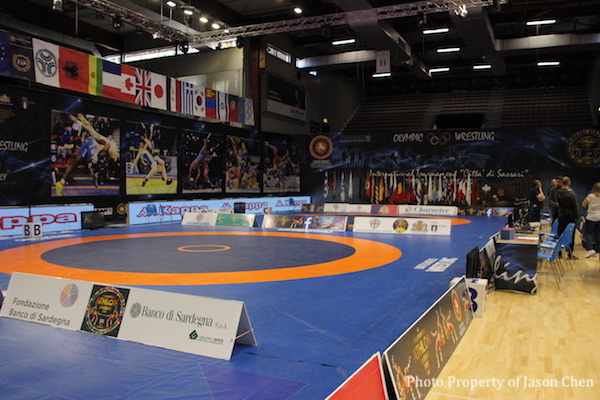 The Matteo Pellicone tournament wrapped up on Sunday with the Beach Wrestling event on the beaches of Stintino in Sardenia Italy.  While no Quebec athletes competed in the Beach Wrestling event, perhaps it was for the best as the tournament finished off with two tough days of competition.  This was my second time coming to Sardenia but my first time coaching the tournament and the experience proved to be a real education.  I got to see first-hand the level of competition that our current athletes would face as well as our future ones and what I saw worried me to say the least.

I’ve always maintained that there is a gap in skill level when it comes to Canadian wrestlers and our international competition.  It’s one thing to read about poor results or see them on video, it’s quite another to see it live.  Some of the things that I saw were just how much our athletes lag behind when it comes to basic skills.  Some of our best Junior and Senior athletes were beaten by competition from countries such as South Korea, Italy and Spain.  These countries are not powerhouses on the world stage and yet our Canadian athletes had a hard time competing let alone winning.  So the question is, when did it all go wrong?

Some of the older generation of coaches that I’ve spoken to have said that athletes from the past were closer to their international rivals than they are now.  We only need to look to the last time a Canadian man medalled at the World Championships was Gia Sissaouri at the 2001 World Championships and the last man to place in the Top 5 was Cleo Ncube at the 2010 World Championships, two former athletes that wrestled for Quebec.  Our women have remained competitive but compared to the dominance that they displayed in earlier years, the results have been in a small decline and clearly this is a problem.  The real question now is what can be done to change this?

I don’t have the solution to this and truth be told, there isn’t one concrete answer.  A multitude of things need to be changed before we can ever see some better results from our men at the international level.  I think the first thing is acknomledging that there is a problem is the first step.  We’ve been content to just say that our athletes were competitive and that they’ll do better next time which has clearly dimished the importance of competition and made it purely a participation sport rather than a competitive one.  There definitely needs to be a change in philosophy regarding this.  Next identifying what can be done to change it is the next logial step.  Limited funding and resources will definitely hinder this, but let’s focus on baby steps first and see if we can at least make some small progress.  Last but not least is to implement the changes and have the patience to see if it works in the following generation of wrestlers.  Giving up if the changes implemented don’t bear fruit within the first couple of years woud be counter-productive.  We must have the patience to see it throught to the end because clearly, what we’re doing now isn’t working.