Home > Articles > Jason's Blog > Preparing for the next generation

It’s gotten to the point in my professional and coaching life where I’m pretty much settled.  Things won’t change that much for the forseeable future and some would say that this stability is a good thing.  Barring any life changing events, I will stay at the school I’m teaching at, thereby staying with my high school team and with my club team as well for the forseeable future.  While stability is a good thing, some might equate it with stagnation.  Stagnation is the kiss of death and as an athlete, you always want to be moving forward, never settling on your past achievements while always seeking to better yourself in the hopes of reaching your ultimate goal, whatever that may be.  To stay in one place or worse go backward should not be an option.  As a coach, I feel that your motivations to progress should be the same.  You want to coach at those bigger tournaments and be implicated in the success of your athletes as they progress.  So if you aren’t moving forward, the question is: “What do you do?” 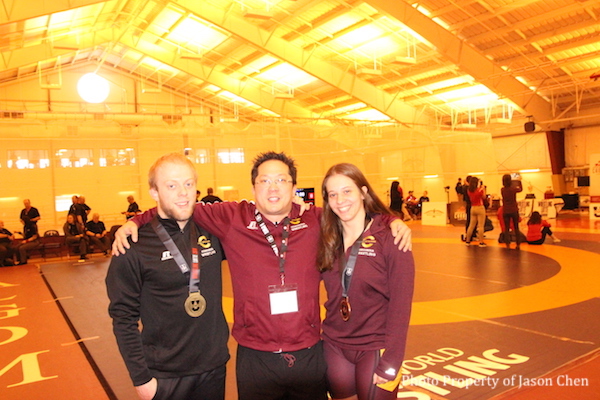 Moving forward, I got to help coach my former VMC alumni at this year’s U-Sport Nationals

One option would be to change venues in order to seek out a new challenge.  This could involve moving to another school or club or even starting up a new school program or club elsewhere. You could also move to a bigger club, hopefully to further your coaching ambitions and to increase your visibility in hopes of being selected to coach at those higher level tournaments.  Changing locations will put you out of your comfort zone, thereby forcing you to maybe mix things up.  Oftentimes, this will make you come with new and innovative coaching techniques and that can’t be a bad thing.  Therefore, change can sometimes be good.

Regardless of your decision, the responsible choice would be to make sure that when you leave, your program is in a good place.  If you’re part of a larger group of coaches in a big club, then your departure shouldn’t affect the overall dynamic of the club.  If you are part of a smaller club or are the only coach, then you have some work to do.  This means that at the very least, you need to make sure that the infrastructure is secure, starting with a coach or coaches to replace you and that you have the support of either the administrators in a school team for the new coaches or the managers of the facillity if it’s a club.  To not do that would be irresponsible as many programs within the past twenty five years have closed shop due to lack of forsight.  This is something that seems to be happening way too often.

Selecting a successor is a difficult process.  You need someone who will represent the ideals of your club, teach the technique the way that you would want it to be taught and finally, to grow the program by also adding in their own insights and improvements.  Finding someone with all those qualifications in one or even two individuals can be difficult at best.  That’s a tall order which also might account for the fact that many programs fold after some coaches choose to retire.

Even if you are able to find your successor, they may not want the responsibility.  Therefore, it’s always if possible, to try and target several successors.  While you would hope that this isn’t the case, the first person of your choice may choose to not stay the course for the long term.  Coaching has to be a passion, not a burden and the responsibility to carry on the traditions of any given program for an extended period of time can be difficult to say the least.  Also, preparing the next generation of coaches has to begin well in advance as foisting the responsibility on someone who isn’t ready can be overwhelming.

This is the thought processes that I’ve been going through the last couple of years.  Though I don’t see myself moving, you can never say with absolute certainity that you will stay in one place forever.  Opportunities for career advancement may come up and this may also require you to change jobs.  Also, in my field of teaching, school closures and transfers can affect your position, thus necesscitating a school change.  I got the taste of this during my first coaching job which was for my own high school many years ago.  Without any warning, they replaced me with one of my own athletes, even though I was a volunteer.  How’s that for nonsensical? After a year, the new coach left, and the program folded.  In addition to this, three years after that the school was shut down due to the increase in gang violence so maybe this was a blessing in disguise.  At the time, I had assumed that the program would run for as long as I wanted it to and never thought about a replacement, let alone getting replaced.

My next coaching job was at a private school called Centennial Academy.  Other than my current school, this was the place that I spent the longest at.  I stayed at that school for ten years before giving it to another coach from our club team in order to pursue another degree.  In this case, finding a replacement was not a problem as it was provided for me.  During my second degree, I was apporached by another private school and though I was pretty busy and retiscent of accepting the position, I did.  This was one was a disaster on my part as my busy schedule and my lack of motivation played a huge part in my lasting just one year.  That program continued on for the following couple of years with another replacement from our club team until it was taken over by outside forces and was subsequently shut down after a take-over by another club team.  In this case, my replacement panned out well, but the school’s continued existence was spoiled due to external forces.

After finishing my second degree, I got a job at a public school and proceeded to start up a program there.  I was pretty enthusiastic as this was a school with no previous wrestling history.  Therefore this was a chance to make something completely my own and I jumped into it in full force.  I had some decent support from the administration, but no budget to run the team.  Nevertheless, I got a practice venue that I shared with another school and I was able to produce a GMAA champion that year (albeit he was a transfer student from an American high school with previous wrestling experience).  As a bonus, I also got some decent results from the team despite the fact that they were all first year wrestlers.  Things were looking good until I was placed on excess.  As the teacher with the lowest seniority, when enrolment goes down, you are placed on a recall list and have to wait for a position to open up.  This is called excess and I was essentially forced to find a job at another school.  All my plans for growing the program the way I envisionned it went up in smoke.  I ended up at a school in the east end of Montreal, a place where I had done my third teaching field experience so I had some familiarity.  Being the responsible type, I enlisted a coach to replace me at my previous school.  The coach I found was willing to take over but he wanted a little payment for his efforts. I phoned up the athletic director and told him that they could train at the Montreal YMHA for free since another school was there at the same time and that all that they had to do was agree on a small payment for the new coach.  Whether he was unwilling or unable, they told me that running a team would be impossible due to the lack of teachers willing to volunteer their time.  Despite my efforts, that program folded as well.

So here I am now, in my current school and in my eleventh year.  Like the previous school, I started up a program with no prior wrestling history and was able to mold it in my own image.  I faced my share of difficulties at first, with my initial challenge of getting both a mat and practice space in a school that was sorely undersized for the amount of students present.  I was also challenged by the fact that the school was mostly a school focused on soccer and that wrestling was completely foreign to them.  Despite these initial challenges, I’ve been able to keep the program running and produce some decent results.  In the eleven years I’ve been here, the program has produced some decent team results, starting with several GMAA champions, a two time national champion as well as medalists at the Junior Nationals, five Canada Games participants (two medalists from those students), two U-Sport medalists (including a U-Sport national champion) and a 2018 FISU participant.  Not too bad all things considered. 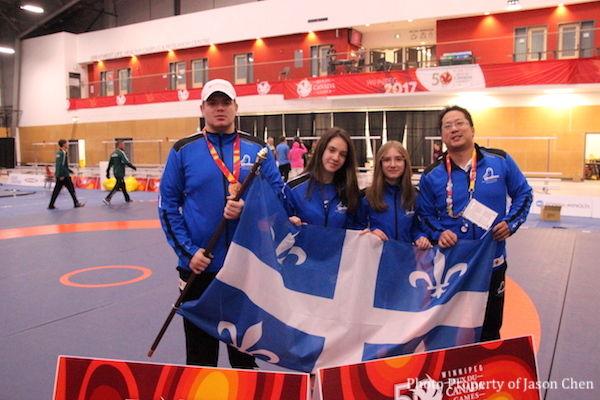 VMC atheltes represent at the 2017 Canada Games in Winnipeg!

So with this modest success that I’ve had, one would wonder why I’m already thinking about passing on the torch to the next generation so to speak.  If experience has shown me anything, is that anything can happen.  I would be remiss in to thinking that I’ll be here till I retire seeing as the odds of that are statistically against me.  All I know is that finding a replacement may prove to be difficult as the location of my school makes it pretty much inaccessible to anyone who doesn’t live in the area.  Also, the lack of space and the fact that it would seem that when I leave, the support for the program would essentially dry up might also be a problem.  All I know is that I’ve essentially started to prepare for the next generation by targeting some of my former athletes, knowing full well that finding a successor will be difficult at best.