A strong contingent of Quebec wrestlers left for the 2021 World Championships, held in Oslo Norway. Members of the Montreal Wrestling Club represented Canada at the 79 kg (Sam Barmish) and 92 kg (Jeremy Poirier) for Mens Freestyle while Linda Morais was our lone representative for the Women as she looked to repeat her World Championship performance from 2019. Our Quebec athletes were accompanied by Coach David Zilberman. 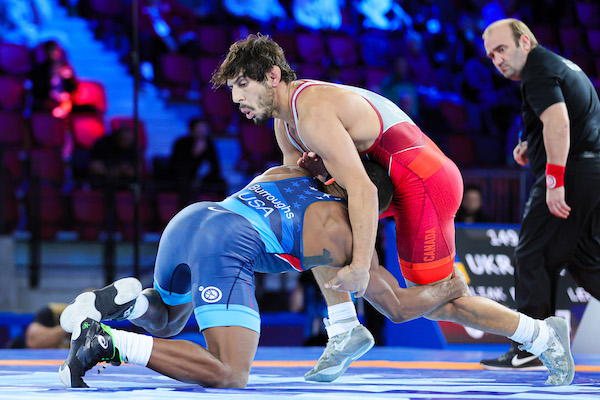 The third day of competition kicked off with both Sam and Jeremy wrestling against some formidable opponents. Sam would wrestle his first match against four time World Champion and 2012 Olympic Champion, Jordan Burroughs of the United States. Sam would wrestle a tough match but would succumb to his experienced opponent by Grand Superiority (10-0). Burroughs would head to the finals, placing Sam in the Repechage against Sakayev Bolat of Kazakhstan. Bolat would forfeit the match, setting up Sam’s next match with Radik Valiev of the Russian Wrestling Federation. Sam would start off well, but would end up losing to the Russian by Grand Superiority (10-0).

In his first match, Jeremy would beat Gilberto Segundo Ayala Rodriguez of Venezuela by pin  (5-0), setting up a match with two time World Champion, J’den Cox of the United States. Jeremy would also wrestle a competitive match, but would end up losing by Grand Superiority (10-0). Cox would lose a close match in the semi-finals and as a result, Jeremy wouldn’t advance to the repechage.

Our final Quebec athlete competing would be Linda Morais, the 2019 World Champion who would be competing at the same weight category that she won at in 2019 when she last competed. Her first match would pit her against a familiar opponent, Grace Jacob Bullen of Norway. After an action packed match, which would see Linda go down early in points, Linda would rally to win the match by pin (9-10) to avenge her previous loss to Bullen. Linda then wrestle against Sarita Sarita of India. Linda would wrestle well, but come up short, losing the match on points by a score of 8-4

While the results weren’t what we wanted, a huge congratulations has to go out to our Quebec athletes, as even qualifying for the World Championships is a feat unto itself. Knowing the quality of our athletes, I have little doubt that they’ll learn from this and come back stronger in the future.