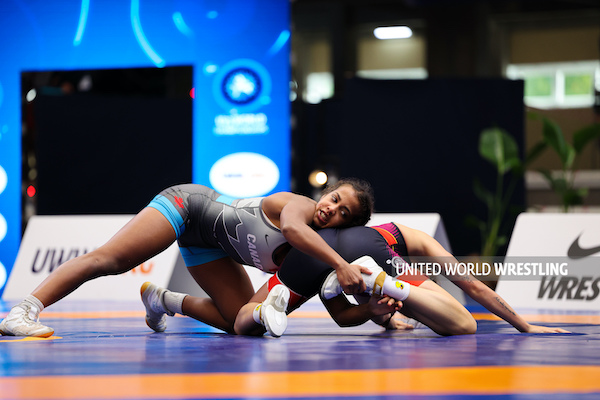 The U-23 World Championships began with Greco-Roman and Women’s wrestling and were held in Pontevedra, Spain. Quebec’s lone representative, Virginie Gascon competed at the 55 kg where in her first match, she would face off against Laura Gomez Vizcaino of Spain. Virginie would cruise to an easy victory, winning her match via Grand Superiority (10-0). Her next match would see another tough opponent, Zeinip Bayanova from Kazakhstan. Once again, Virginie would show her class and win her match via Grand Superiority (10-0), sending her to the semi-finals where she would face off against Moe Kiyooka of Japan.

Despite starting off strong Virginie, would lose to her Japanese opponent by Grand Superiority (10-0) and would head to the Bronze Medal final to face off against Elvira Kamaloglu from Turkey. In the Bronze Medal final, Virginie would once again, start the match strong, taking a lead into the second half. However, her Turkish opponent would make a comeback, outpoiting Virginie in the second half, winning the match by a score of 8-4. Virginie would finish off the tournament in 5th place.

Quebec’s other athlete, Jason Luneau would wrestle next in the 61 kg Freestyle division. Jason’s first match would be against Stilyan Yanchev Iliev of Bulgaria.

While Jason would end up scoring five points in the match, he would eventually lose on points via score of 11-5. Iliev would lose his next match to his opponent from Georgia, thereby preventing Jason from advancing to the repechage.

Though the results weren’t where we could have hoped for, congratulations must go out to our two Quebec athletes as representing Canada at World Championships is an accomplishment in itself.