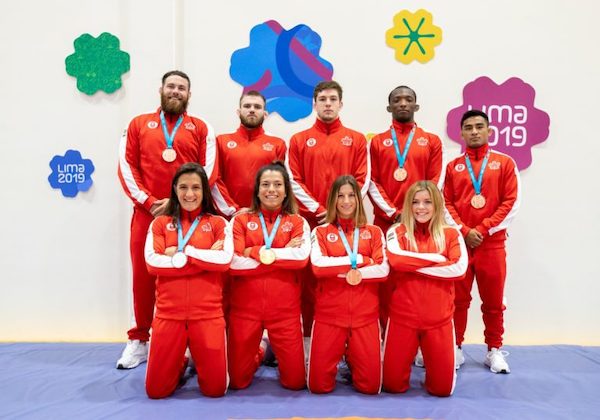 The Pan-American Games took place in Lima Peru this past weekend from Wednesday August 7th to Saturday August 10.  Wrestling is just one of the sports contested during this continental championships held every four years.  Concordia, Montreal YMHA and Tristar Wrestling Academy had athletes competing in the Freestyle and Greco-Roman events.

Philip would lose his quarter-final match to Carlos Munoz of Columbia and would not advance to the repechage.

Thomas would also lose his quarter-final match to Tracy Hanncock of the United States but would advance to the medal round but would come up just short in his bid for bronze.

In the Freestyle event, Alex Moore (86 kg Concordia University) would start off his first match with a dominant win over Ricardo Baez of Argentina.  His next match, Alex would lose to an extremely tough opponent, Yuri Torreblanca from Cuba but would head to the repechage from there.  Alex would record another impressive win over Diego Ramirez of Paraguay and would face off against off against James Downey from the United States.  Alex would wrestle well, but would come up short with a score of 5-0 and finish the tournament in 5th place.

Also in the Freestyle event, Jordan Steen (97 kg Montreal YMHA) would start his quarter-final match against Jose Diaz of Venezuela.  Jordan would wrestle well but just come up short (3-0) but would head to the Bronze Medal against Luis Miguel Perz from the Dominican Republic.  Jordan would put up a good effort but come up short and also finish off in 5th position. Though the results were not what we could have hoped for, a congratulations has to go to our athletes for placing in such a tough competition.