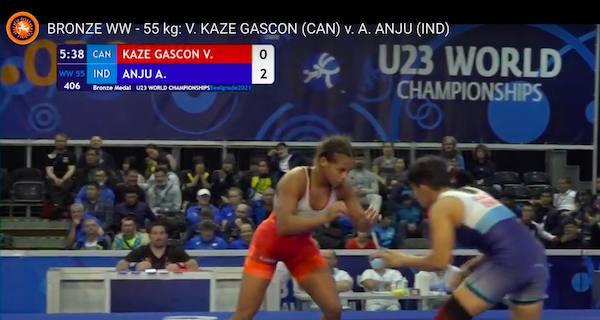 The U23 World Championships took place in Belgrade, Serbia and the province of Quebec was well represented as six athletes qualified from Concordia University and the Montreal Wrestling Club respectively. Wrestling for the women, Virginie Gascon (55 kg), Erin Rainville (59 kg) and Alexia Sherland (72 kg) began the competition which was followed by the men, with Jason Luneau (61 kg), Julien Choquette (92 kg) and Aly Barghout (125 kg), competing afterwards.

Erin Rainville would wrestle her first match against Anna Szel of Hungary. Erin would start off the match well enough but would end up losing the match by Grand Superiority (10-0) and would not advance to the repechage. Alexia Sherland would wrestle well, but would also lose her opening match on points (8-2) to Maria Nitu of Romania and would also not advance to the repechage.

On the Men’s side, Jason Luneau would start his first match off against Kamil Kerymov of Ukraine. The match would start off very quickly, with both wrestlers trying to get the quick advantage. In the end, Jason would lose via Technical superiority (10-0) and would not progress to the repechage.

Julien Choquette would also begin his first match of the tournament with an opponent from Ukraine, Denys Sahaliuk. The match was a close one, with Julien not giving much, but would eventually lose to his opponent by a score of 6-0 and would not progress to the repechage.

Finally, in the 125 kg division, Aly Barghout would have his first match against Anil Kilicsallayan of Turkey. Despite leading for a portion of the match, Aly would end up losing the match on points by a score of 3-2 and would not advance to the repechage.

Though the results weren’t where we would hope they would be, the fact that our athletes were able to compete at the level they did after such a long layoff, is a testament itself. Hopefully we’ll see our Quebec athletes rebound for the next international tournament and will get the results that we know they’re capable of.