Home > Articles > Jason's Blog > What a weekend in Fredericton 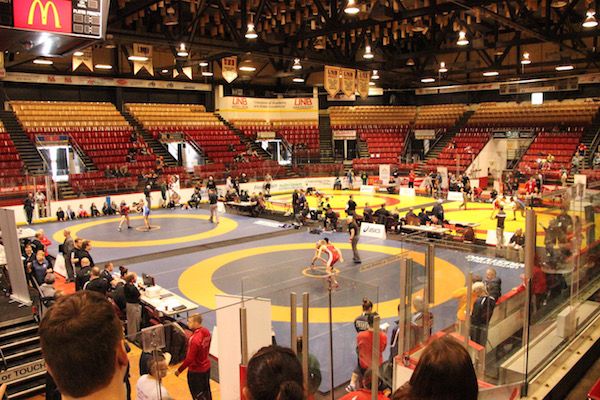 The Junior-Senior Nationals came to a conclusion this weekend and for the province of Quebec it could not have gone better as Quebec produced some strong results from various clubs.  This despite the fact that we are a small  province with a small base of athletes to select from.  More participation from the grassroots level would be nice but that’s a topic for another time.  For now, I am absolutely thrilled by what was acoomplished this weekend.  As a coach, seeing our young athletes perform and reach new personal goals is as thrilling as seeing any professional sports team win their respective championship.  I would even say that it’s better knowing the hard work and sacrifice that these young athletes do.

This weekend, we saw many young Quebec athletes achieve their personal goals and some even winning their first National medals.  We saw wrestlers that have been with their respective clubs for many years, put up strong as well as consistent results.  As a coach and an athlete, consistency is what we strive for.

In an Olympic year, we always tend to see less attendance at the National Championships.  Coupled with the fact that it was in New Brunswick, which tends to limit attendance from the western provinces, makes for a smaller competition.  This does not mean that the competition level is weaker.  Rather it tends to focus and accentuate the level of competition as provinces only send their better athletes.  This makes the accomplishments of our Quebec athletes that much more significant.

The Birds-Eye View of the competition

A special acknowledgement goes out to Peter Montour and Dominique Choquette who produced the two finalists at the 120 kgs division.  The battle was a technical one wtih Frederique Choquette emerging the victor.  The province of Quebec is the benefactor of these two athletes as hopefully they will go on to produce many results at the provincial, national and international level.

With this performance by our provincial clubs this past weekend, one would hope that it encourages both more recruitment as well as the retention of our current athletes.

I have often heard some coaches talk about the “Glory Days” of wrestling in the province of Quebec and when I started wrestling, I did in fact experience some of that.  Going to provincials in places as far as La Pocatiere Quebec and having nearly twenty schools competing at the GMAA Wrestling finals were just some of the things that I experienced when there was more wrestling in the province.  Maybe this past weekend’s performance will help to see this come again.