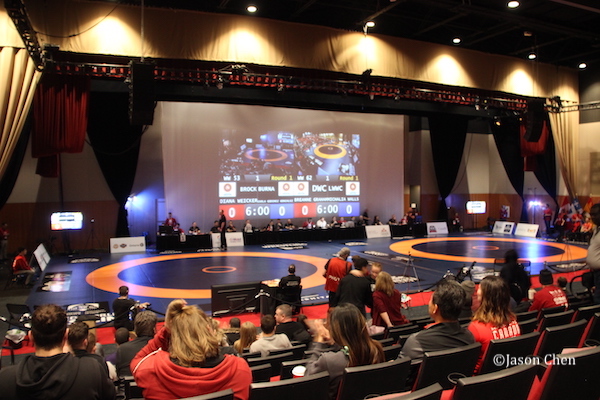 The Dalai Lama said that “When you talk, you are only repeating what you already know. But if you listen, you may learn something new.” This statement pretty much encapsulated my weekend as I attended the Canadian Olympic Team Trials with my club team the Montreal Wrestling Club/NTC. I really didn’t expect to do much since I don’t work that closely with the athletes that are involved. So, decided that this would be a great opportunity to listen and learn since not a lot was expected of me.

I looked at the trials as a way to watch some good wrestling and help out wherever I could. And since I had a chance to visit Niagara Falls the city, it was a good opportunity to get out of town and take a break from school. For the most part as expected, I didn’t do a lot of coaching or driving which is pretty unusual when I go out of town for a wrestling tournament. Some people may think that it was a waste of a weekend since I was essentially there as an emergency coach, to be used only when needed if I was needed at all. I didn’t see it that way and I look at this past weekend very differently. In my life, if I ever have the chance to just immerse myself in a learning situation, I consider it a plus. I can hypothesize that to watch master level coaches work and be in that atmosphere with my fellow coaches was much better than the professional development I missed with my school board on Friday. I’ve always considered myself a lifelong learner and being immersed in that atmosphere both leading up to and at the tournament, how could you not learn?

It started with the car ride up. Normally, I’m by myself with only the athletes to talk to. While it’s a good chance to impart some knowledge to some eager minds, the talks aren’t all that reciprocal. While I did learn a great deal about the athletes and how they approach competition, it’s hard to categorize those talks as a personal learning situation as I’m transmitting more than receiving. The trip to Niagara was therefore very different. On the way up to the trials, the passengers in the van consisted of myself, Martine Dugrenier, David Zilberman and Rob Moore.

The amount of coaching experience in that van was considerable to say the least! I used this opportunity to ask a lot of questions, trying to absorb as much as I could. Being with my own school and my own athletes, we seldom get these opportunities to talk for extended periods of time and while I do have a lot to offer, I tried to ask more questions than I answered. After all, thinking of what the Dalai Lama said, I could learn a lot from just listening and in the end, that would benefit me and my athletes.

To be clear, I’ve never participated at the Olympic Trials as an athlete. By the time my trials would have come up in 2003, I was in an emotional rut. Competing had not become enjoyable for me and I had a pretty much removed myself from the National Championships, thereby negating my participation at the Olympic Trials later that year. I had wrestled a pretty poor CIS Championships earlier on and the competitive fire had left me. Coupled with the fact that I had sustained a major injury to my shoulder the previous year and it was fair to say that I had a lot going on in those last two years of my competitive career.

I don’t regret not going to the trials since I doubt that in my current frame of mind, I would have been able to do anything. If anything, I saved myself a potential embarrassment and my club team some money.

I’m also not the type of person that judges his accomplishments by the prestige of the events I attended. As much as it would have been nice to have participated in the Olympic Trials, I wouldn’t have wanted to go just for the sake of going. That would have been selfish and self-serving and probably would have left me bitter toward the sport.

In the end, while I didn’t sit in the corner much, I got to interact with some athletes both before and after their matches. I was able to mentor them and give them some pointers from my many years in the sport. If I was an insecure person, I would probably feel that my worth would be judged by the volume of my contribution. For the most part I’m not and if I was able to help our athletes during and after the tournament, I look at this weekend as a roaring success. Here’s hoping that one day, I’ll have developed an athlete that will not only be capable of competing at the trials but winning them.