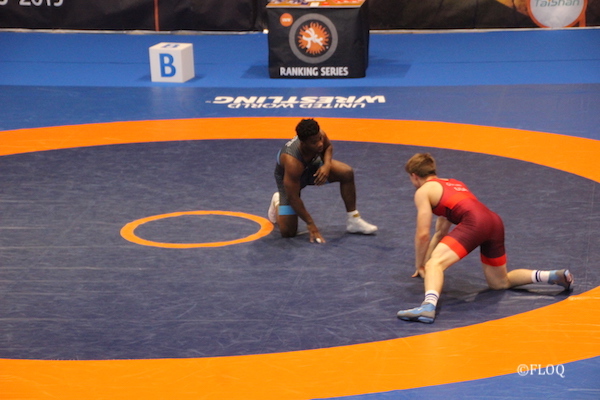 Having gotten back from Italy to a stack of corrections, which I’m really not looking forward to, I took the opportunity to reflect on my experience at this year’s Matteo Pellicone Tournament. I’ve had a chance to digest the whole thing as it was a busy week in Sardinia, starting from when we departed to when I got back.  The whole experience has allowed me to basically reflect upon coaching and the event itself as well as the range of emotions that I experienced during that time.  As a result of this, I’m going to try condensing my experiences in a more or less chronological order to hopefully outline my experience during the competition.

As I sit in the airport about to leave for yet another competition with what seems like the one thousandth time, I’m reminded at times of just how lucky I am.  This year, my destination as it was last year is the Matteo Pellicone Tournament, held in Sardinia Italy.  This is my second time coaching at this tournament and my third time to Sardinia.  The difference this year?  The tournament has now been upgraded to a UWW Ranking Tournament, thereby guaranteeing that the qualtiy of competition will be way higher that it has been in the past.  The tournament has promised to attract both World and Olympic Champions from many countries and as both a coach and fan of the sport of wrestling, I’m both excited and humbled at my chance to coach here as I’ve worked hard throughout the many years to help our athletes in my own small way to be here.  Though it’s going to be a tough three days, I can’t wait for the competition to begin!

The Junior Tournament was the first on the schedule for our Quebec athletes.  While not being the showcase event, it still attracted a strong contingent of wrestlers from many strong wrestling countries such as Russia, Hungary and Kazakhstan.  Though small in the overall numbers, the level of competition was very high and many of our Quebec athletes had to rise up to the challenge to even win a medal.

When I was competing, funding as well as the opportunity to compete in these tournaments was few and far between.  More often, we had to make up for our lack of international matches by just getting in as many matches as we could from as many places we could drive to.  Back then there was more wrestling so that made this strategy a little more feasible.  I believe that our Juniors, though having a some very tough matches, benefited from this experience tremendously and they can only get better from this.  The Junior event was mostly a test-run for the Senior competitions but still ran very smoothly.  After many years of running this tournament, I would assume that even though there are lot of things going on, they have it down to a routine.

After the Junior tournament finished, the Greco-Roman event took place, giving us a much needed day of rest as none of our athletes compete in Greco-Roman.  The event that we had all been waiting for was Men and Women’s tournaments and the excitement was ratcheted up with the arrival of some of the top level wrestlers to the hotel.  World Champion and Italy’s top wrestler, Frank Chamizo gave me a quick acknowledgement, which pretty much illustrated that this was going to be a strong competition.  This was my first time coaching in an international event where the calibre of athlete was this high.  To be clear, I’ve coached athletes in international competitions and have seen many athletes as they were beginning to start their international careers but never this many in the prime of their careers.  Once again as a fan of wrestling it was pretty cool to say the least.

Some of the matches that stood out in my mind were the 74 kg semi-final match between Khetag Tsabalov and Frank Chamizo.  The match was action-packed, with Tsabalov taking a lead at the end of the first period only for Chamizo to snatch it away at the end of the second period to win the match.  Another match that stood out in my mind was the 65 kg final (my old weight division) between Russia and India.  While I wasn’t too familiar with either competitors, the action as well as the quality of match was punctuated with some back-and-forth scrambles with India winning the match with some really slick duck-unders.  As a fan of wrestling, you had to marvel at the skill level on display.

Even though I was able to see a few matches, my purpose for being there was to coach our Quebec athletes.  Assuming more of an assistant coaching role, I was able to sit in the secondary corner throughout the majority of the matches though with some of our athletes, I was able to sit in the main chair.  The last thing that I basically took from all this was that no matter what level you coach at, many of the things that you apply to the younger athletes still translate well to the seniors.  The only difference the speed in which you need to adapt in order to best help your athlete. 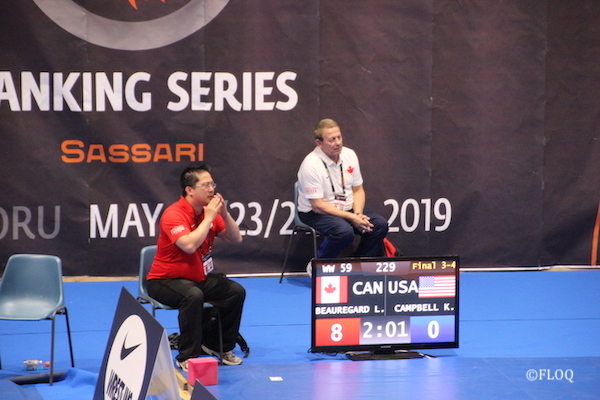 Throughout the tournament, it was nice to have one of our strongest supporters George and Eleanor Reinitz make the trip to Sardinia to come to watch our athletes compete.  They have supported our club for many years and to see them now made me feel really happy. 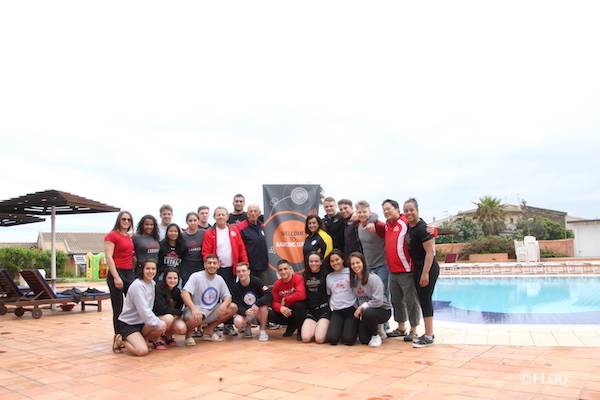 Our Quebec athletes and coaches with George and Eleanor Reinitz

My former high school team captain, Amanda Savard was at the tournament to compete.  Though the results weren’t what we wanted, her fourth place finish helped Canada to secure the top team for the Women’s competition.  When she started on my team all those years ago, I wonder if she thought that she would be competition for Canada on the international stage.  These are the memories that live with you and hopefully; they will live with her as well. 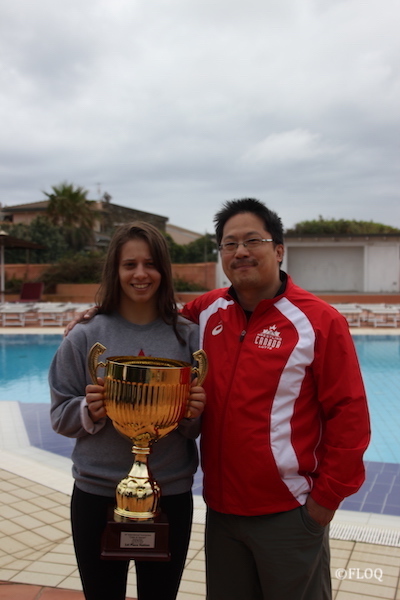 Finally, I hope to be able to come the tournament next year, and if possible stay for the training camp as this year I had to make an early exit to come back to work.  I hope that the tournament continues to showcase strong wrestlers and that our Quebec athletes rise to the challenge.  Finally, I hope that I can bring some more of my high school athletes, whether they’re graduates or current students to experience the atmosphere of the tournament and hopefully inspire them to greater achievements.