Let’s face it, coaching for most coaches in Canada is more of volunteer job than an actual career.  While there are few jobs out there that allow you to coach full time as your career, most coaches, even the high level ones have other jobs.  I would think that the only coaching jobs in which you actually have an opportunity to make an income in coaching at the higher levels would include the big four sports in this country.  This of course would be hockey, soccer, football and basketball.  These sports have professional levels, attract large numbers of kids and are pretty popular among parents when choosing a sport for their child.  These coaches in turn, if fortunate can make a good living from coaching.  However, there are many coaches that I’ve met throughout the years coaching at higher levels and even amongst the big four for sports that have other jobs.  For them, coaching is to supplement their income and not their sole source of finance.

In countries like the United-States, higher level coaches are paid accordingly.  Sports are seen in a very different way for our neighbours to the south and are honoured in a different way.  Being a star athlete is often your ticket to a first class university on a full scholarship that your family wouldn’t be able to afford otherwise.  This in turn attracts coaches as the number of athletes will insure that there is a demand for coaches.  In Canada, we don’t have the same of numbers, and therefore won’t need as many coaches.  This holds true for every sport so in a niche sport like wrestling in Canada, the availibility of full time coaching positions is pretty small. 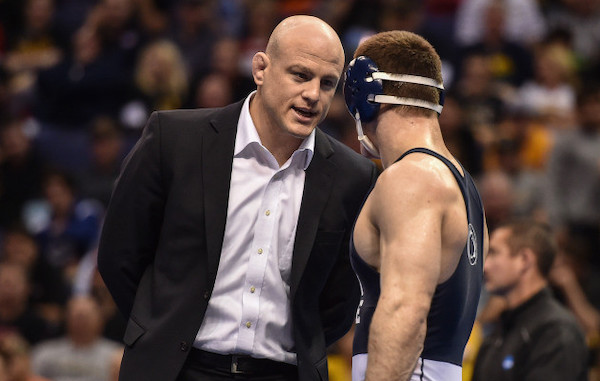 Cael Sanserson: an outsanding wrestler and coach of Penn State

So most coaches will volunteer their time and stick with their respective teams in the hopes that their efforts will bring them to the next level.  You establish a routine of practices and tournaments with an end goal in mind.  So basically, when the opportunity to coach at a competition that’s out of your normal routine comes up, most coaches will jump at the chance.  After all, your restrictions as a volunteer are few and hopefully you have a certain amount of flexibility to move from one place to another without politics playing a factor.  Also as a volunteer, your motivations tend to be somehwat more pure in my opinion since the development of your athlete will be your prime focus and won’t have a finacial component attached to it.  That plus the fact to chance to experience something new is always welcome.

With that being said, it’s important that you have an employer that will support your coaching endeavours.  Working in a school, I’ve been pretty fortunate to have the support of my administrators.  It also helps that I’m bringing student athletes from the school, thereby insuring some exposure for our school.  I would hope that other coaches who aren’t in the field of education have a strong support network to allow them to be able to follow their athletes to various tournaments.  I’ve said this in previous blogs that in Canada it’s very difficult to be a coach as we don’t get much support from out governing bodies and our government in general.  It sometimes seems that we have to succeed in spite of all the obstacles we face.

The Matteo Pellicone Tournament; I would love to go back again this year

This new season, I’m looking forward to all the local and international tournaments that my athletes will be competing in.  I’m also hoping for some new opportunities that may come my way as I would love the chance to coach at another international tournament that I’ve never coached at before.  The opportunity to coach at the Club World Cup in Terahn, Iran would have been one but that opportunity came and went as American sanctions all but scuttled our chances of getting sponsored to go to the tournament, making our participation very dubious.  The Matteo Pellicone tournament in Sassari City, Italy last year was a great experience as this was my first time coaching at the tournament.  Hopefully, I’ll get the chance again this year.  Likewise, the U-Sport National Championships at Alghoma University was also another tournament that I coached at for the first time and though I would like the opportunity to do so again, the fact that the tournament will be held in Calgary will probably mean no.  Nevertheless, the new season begins and I face it with a sense of optimism of what is to come.  Hopefully I’ll get the opportunity to experience new coaching opportunities and get expand my horizons even more.